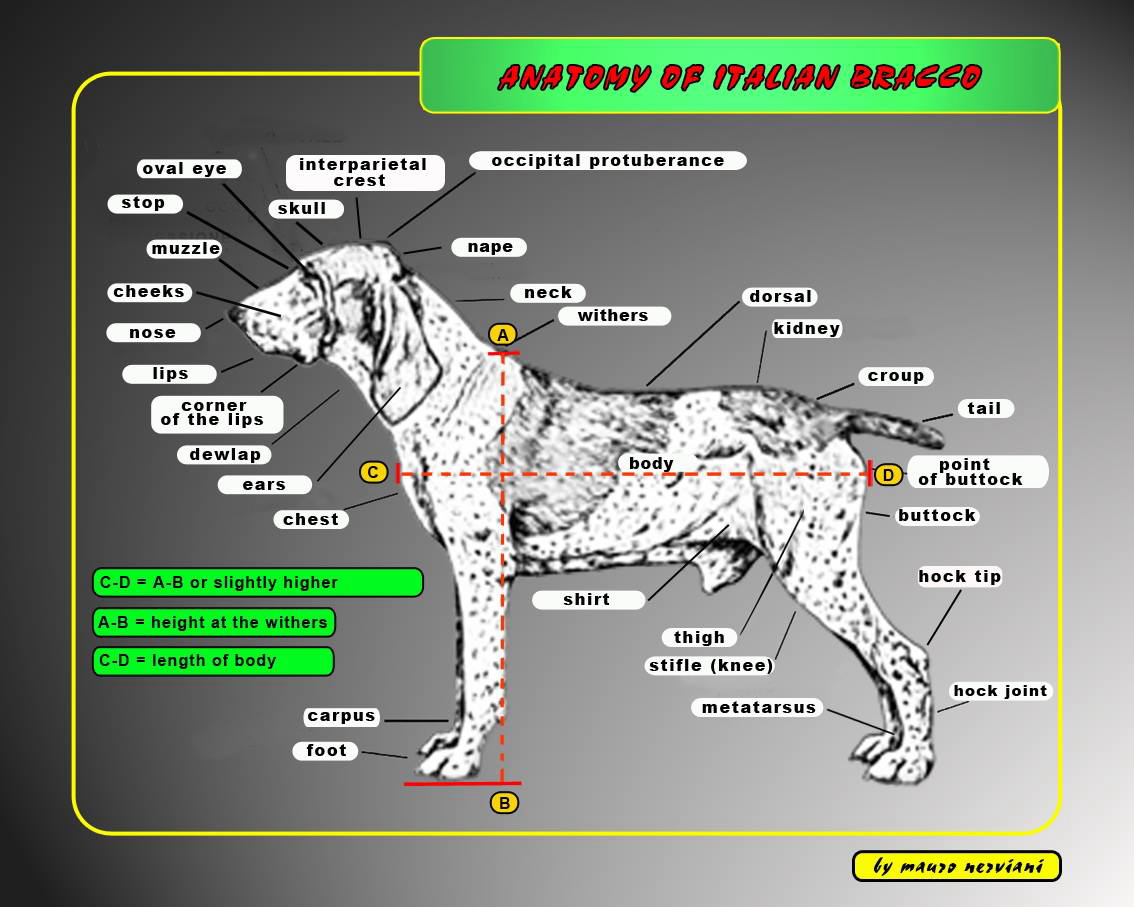 This dog of ancient Italian origin used for bird hunting has modelled itself and developed over the ages; from the hunting of yester years by means of hunt and shooting. Frescoes from the 14th century are proof of the indisputable timelessness of the Italian pointer over the centuries, regarding his morphology or his hunting aptitudes as a pointing dog. Selected for great ability in fast and wide trot and by nature an excellent retriever.

Of strong and harmonious construction, powerful appearance. The preferred subjects are those with ean limbs, well developed muscles, well defined lines with a markedly sculpted head and a very obvious lower orbital chiselling, elements which all contribute to give distinction to this breed.

Tough and adapted to all types of hunting, reliable, endowed with an excellent ability to understand, docile and easy to train.

Skull: Seen in profile, the skull is in the shape of a very open arch. Seen from above, it forms lengthwise an elongated ellipse. The width of the skull, measured at the level of the zygomatic arches, should not exceed half of the length of the head. The bulge of the forehead and the supraorbital ridges are perceptible. The frontal groove is visible and ends at mid-length of the skull. The interparietal crest is short and not very prominent. The occipital protuberance is pronounced.

Nose: Voluminous, with large well-opened nostrils, protrudingslightly over the lips with which it forms an angle. Colour is more or less pink  – to flesh-coloured or brown, depending on the colour of the coat.

Muzzle: Either slightly arched or straight.  Its length is equal to half of the length of the head and its depth measures 4/5 of its length. Seen from the front, the lateral sides of the muzzle converge slightly, still presenting a foreface of good width. The chin is not very  apparent.

Lips: Upper lips well developed, thin and floppy without being flaccid, covering the jaw; seen in profile, they overlap the lower jaw slightly. Seen from the front, they form an inverted « V » below the nose; the corner of the lips must be marked without being droopy.

———-Comment: the lips that go beyond just the jaw we see few, if any are females. The lips seen from the front in my opinion do not form an inverted V, but rather an inverted Y.

Eyes: Semi-lateral position with a soft and submissive expression, neither deep set nor prominent. Eyes fairly large, eyelids oval shaped and close fitting (no entropion or ectropion).  The iris is of a more or less dark ochre or brown colour depending on the coat colour.

Ears: Long, they should reach the tip of the nose without being stretched. Their width is at least equal to half their length; raised only very slightly; base rather narrow, set rather backwards at level of zygomatic arches; a supple ear with a front rim well turned inwards and really close to the cheek is appreciated; the tips are slightly rounded.

———-Comment: Now it’s rare to observe ears that respond to the postulate of the standard; on the other hand, it’s very frequent to observe narrow ears.

Powerful, in truncated cone shape, length not less than 2/3 of the length of the head, well detached from the nape. The throat shows a soft double dewlap.

———-Comment: Also for the dewlap, it results rare this appendix in line with the decrees of the standard. But frequently on can observe dewlap too well-developed and flabby that take off elegance and functionality to the dog.

Topline: The topline presents two lines: one, almost straight, slopes from the withers to the 11th dorsal vertebra; the other is slightly arched, joining with the line of the rump.

Withers: Well defined, with the points of the shoulder blades well separated.

Croup: Long (about 1/3 of the height at the withers), broad and well muscled; the ideal pelvic angulation (angle formed by the pelvic girdle with a horizontal line) is 30°.

Chest: Broad, deep and well let down to the elbows, without forming a keel, with well-sprung ribs, particularly in the lower part.

Underline and belly: Lower profile almost horizontal along the ribcage rising slightly at the abdomen.

———-Comment: Strangely in the standard the word “shirt” is not present, but I believe that in the Bracco, normally present, has to be regulated, for example indicating that starting from just above the knee going to link up with the chest conditioning decisively the inferior line.

TAIL: Thick at the base, straight, with a slight tendency to taper; hair short. When the dog is in action and especially when questing, it is carried horizontally or nearly. The natural tail should not extend below the hock and have the above-mentioned features.  If docked, for hunting purposes and in compliance with health and animal welfare, the tail must have a length of 15–25 cm from the root.

Elbow: The point of the elbow should be on perpendicular line from the rear point of the shoulder blade to the ground.

Forefeet: Strong, slightly oval shaped; well arched with tight toes and strong nails well curved towards the ground.  Colour of nails is white, yellow or brown, of a more or less dark shade depending on the colour of the coat; pads elastic and lean.

Hind feet: With all the characteristics of the forefeet: they have dewclaws, the absence of which is not a fault. Double dewclaw is tolerated.

Extended and fast trot, with powerful propulsion from the hindquarters, head raised and nose held high in such a way that, when hunting, the nose is higher than the topline.

———-Comment: Here, in my opinion, there is an huge mistake. The standard of work allows that there are gallop times and so I’d say: too wide and fast with the gallop times admitted into subjective situations. Someone states that it is described, only in this case, the gait that the dogs have in the ring. This “someone” should explains because all the other breeds don’t mention as gait the trot “in the ring” that all dogs develop in the presentation phase.
In particular, I notice that the English breeds have only the hunting gaits and not the ring gaits one. Honestly it seems a trivial excuse to justify a gross mistake in the drafting of the standard.

———-Comment: It’s a coercive instrument that can be useful to increase the trot times or help to trot more often and to make it maybe immediately, also as soon as the dog has been untied, thing almost indispensable in the working trials. Its purpose can be useful, in a lot of cases, to improve the natural trot of the subject.
This instrument can be use to trot, after long exercise, also some gallopers. However, it’s indispensable that it is used on subjects physically and psychically very exuberant. If a dog is not exuberant for physicality and avidity, the harness will not be useful, because it couldn’t accelerate a trot intrinsically limp. The galloper’s trot, obtained with this instrument, will be with very frequent beats and it will miss or it will be very less evident, the sleep time that is peculiar characteristic of a resulting trot to a rear strong push. It is crucial to distinguish the natural trot from that set up, to not go to reward dogs that do not transmit the dowry which has made report them as breeding (that is the purpose of field trials).

A careful and competent eye can assess whether a trot is natural, possibly assisted, or fully coerced. But now, having been admitted to the gallop in field trials, it is likely to see rewarded subjects galloping always except when they come into enacting and here we should point out that it is not enough that a dog trots only when it goes on enactment, because the trot is and remains the pace more in identifying Italian Bracco.
In proof of working, which normally takes 15-20 minutes you can not expect that a healthy and enthusiast dog gets, just untied, to trot, but you can expect that till the turn the dog do some stage of assessment during which he must get to trot.
If he would cover the area only with straight diagonal, without olfactory investigations, with the rigid head, a frequent jokes and without suspension, then you will be able to identify as a dog built and definitely he should not be rewarded.

Tough but elastic; finer on the head, the throat, the armpits and on the lower parts of the body. The visible pigmentation must be of a corresponding colour with the coat, and never show black spots.

The pigmentation of the mouth is pink; in the roans or white and chestnut coloured dogs they sometimes show brown or pale chestnut spotting.

Hair: Short, dense and glossy, finer and shorter on the head, the ears, front part of the legs and feet.

White. White with patches of varied size of an orange or more or less dark amber colour. White with more or less large chestnut patches. White speckled with pale orange, i.e. orange roan. White speckled with chestnut, i.e. chestnut roan. In this last combination, a metallic sheen is appreciated, and a warm shade of brown is preferred, recalling the colour of a monk’s frock.

A symmetrical facial mask is preferred, but the absence of a mask is tolerated.

Weight: Between 25 and 40 kg depending on size.

Any departure from the foregoing points should be considered a fault and the seriousness with which the fault should be regarded should be in exact proportion to its degree and its effect upon the health and welfare of the dog and on its ability to perform its traditional work.

Excessive amount of skin causing an exaggerated dewlap or an un-divided dewlap  and too many wrinkles on the head.

Size, 2 cm above or below the standard height at the withers.

An upturned tail is highly undesirable

Any dog clearly showing physical or behavioural abnormalities shall be disqualified.

Pigmentation of skin and annexes with traces of black.

Only functionally and clinically healthy dogs, with breed typical conformation, should be used for breeding