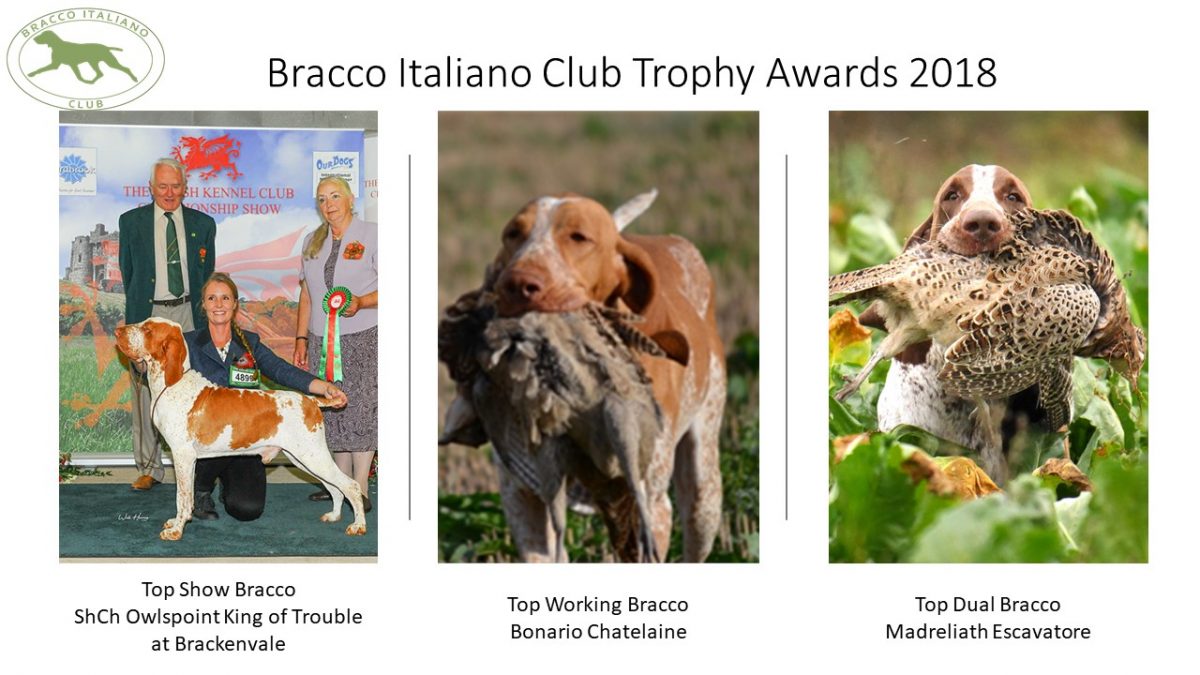 Many Congratulations to Alan and Celli, Karen and Ted and Michelle and Digger!

On the showing side we saw fourteen CC’s awarded to the following dogs throughout 2018: (Visit Show Breed Records Page Here)

On the working side we have also had a busy year. Visit Working Breed Records Page Here

Competition wise, 6 different Bracchi have featured in the awards at working tests and field trials.

Alan’s Celli (Bonario Chatelaine), five working test awards in open and three Open Field Trial Awards including a 3rd in Open, the highest place a Bracco has ever been awarded.

Gill Pillingers Fenn, (Withamfriary Fenn) a fourth in a novice working test award and a COM in a novice Field Trial.

Not taking anything away from these dogs, the stars of 2018 for Sue Parr, Working Secretary were Alan’s Senza (Bonario Fagiana) and Emma Carter’s Bella (Withamfriary Dorothea)  both competing in puppy and both picking up 8 awards, each of them achieving exactly the same awards. Including six firsts between them….. something that has never been done in the breed before….. exciting times ahead ….

In other sports, we have seen Joanna Banks with Braccorions Guccilicious gaining a 1st place awards in BCOS Grand Prix for Obedience and several placings in Bikejor for Jackie Carr Jones with Sienna, with Fiona Godsmark and Hugo also starting out on their novice Bikejor journey with an early award.

So, It just remains for us to wish everyone a happy and successful 2019 with your dogs in whatever you do with them and do let us know of your results.